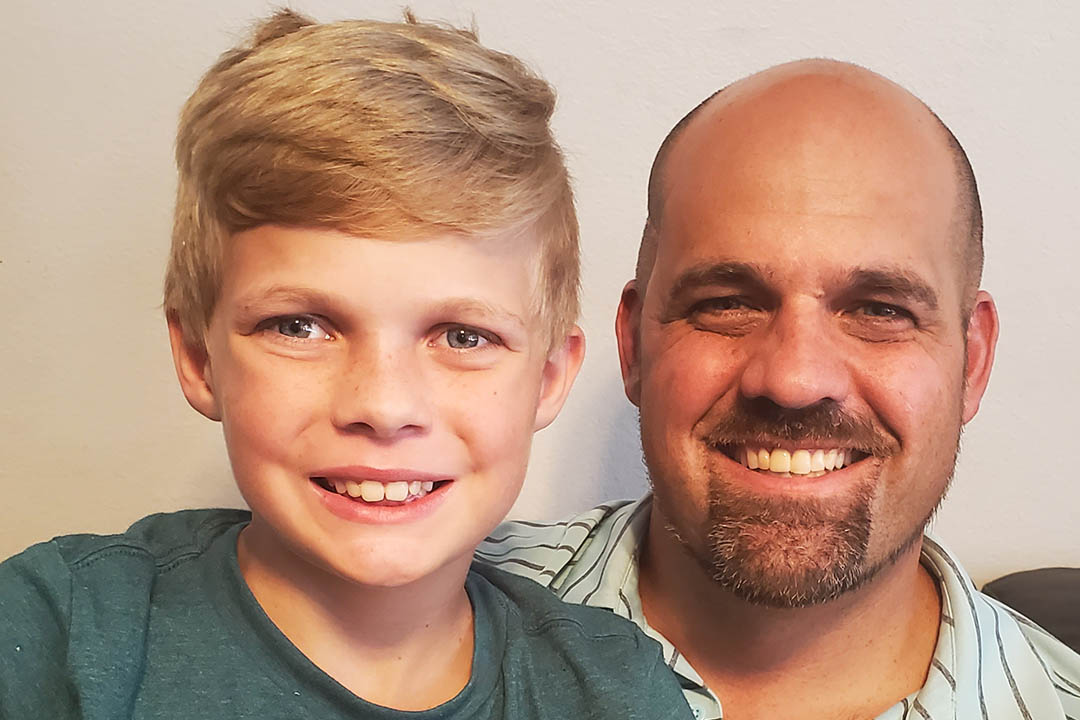 A half-day off work with sun in the forecast seemed like the perfect opportunity for Derek Stock and his wife to enjoy an afternoon with their two youngest children. On June 30, they set out in their boat from Williams Park in Riverview to do some fishing and swim at popular Beer Can Island.

But a fight for life and a race to perform CPR were about to unfold.

After a little fun on the island, storm clouds appeared far away on the horizon. The Stocks and their children, ages 9 and 11, decided to head home.

“It felt like we were being proactive by leaving when we did, ahead of the rain and before most of the other people who were there swimming,” said Derek, manager of Engineering & Maintenance at Tampa Electric’s Polk Power Station. “I started feeling better as we got closer to the [Williams Park] dock.”

At the front of the boat, 11-year-old Levi was standing ready to tie their craft to the dock. Suddenly, out of a blue sky, one of worst things any parent could imagine happened.

The bolt entered the boy’s body at his tailbone and exited through his left foot. He toppled out of the boat into the water.

“I don’t remember sound at that moment, and I couldn’t see anything except Levi’s body sinking,” said Derek, who without thinking jumped into the water after his son.

Derek’s voice cracked. “I could see him sinking into the murky water.”

Adrenaline kicked in. Pulling his son to the surface, Derek got him onto shore with help from nearby boaters, as Derek’s wife called 911. Panicked but keeping it together, Derek gave his son CPR. His wife stayed on the phone with the 911 operator. Hillsborough County Sheriff's deputies arrived in four minutes or so – still an absolute eternity for devastated parents.

An ambulance raced Levi to Tampa General Hospital. Unresponsive, the boy had suffered a cardiac arrest. But then doctors found a pulse – good. They performed their flurry of tests and measures to help him. He was breathing but not out of the woods yet.

At the hospital, the Stocks waited for word from the doctors. Then, positive news: the boy had suffered no brain swelling, and all body scans were good. They monitored him for a few days for good measure.

Yet the father’s mind still swarms with thoughts, some of them almost too much to bear.

“What-ifs. What if I hadn’t been able to get him while he was sinking? My wife has been the strong one through his recovery, but I need to stop asking what-ifs. Thank God he’s still with us.”

Amid the flurry of media attention Levi has received, Fox 13’s Chief Meteorologist Paul Dellegatto addressed a big what-if for Derek via Facebook: “To be honest, Derek, you can follow all the safety guidelines, and the risk of a lightning [strike] is rarely reduced to zero. Every storm has its first lightning strike, and that in itself is impossible to prepare for. Sometimes you are doing your very best to get back to shore, and a bolt will strike.”

TGH doctors noted another thing that made a difference, maybe more than anything: Derek’s ability to administer CPR in time to save his son’s life.

“I have to stay up to date with CPR certification as a youth football coach, but TECO has been wonderful about promoting CPR to its team members, including offering onsite training,” he said. “I’m a faithful believer in the power of CPR. Please, I’m telling everyone – just get those skills. It could help save someone you love.”

“We’re focused on burn care and pain management,” Derek said, adding that another thing he faithfully believes in is the power of caring from his TECO family.

“I’m grateful for everyone’s prayers, for everyone reaching out to and so many more. Levi loves the gifts he’s received from TECO; they’ve really lifted him up at home.”

Follow-up from the Hillsborough County Sheriff's Office included a texted photo of the hammer wielded by Marvel hero Thor, a tool said to be among the strongest things in the universe. But on an otherwise calm, quiet day in Riverview, a father’s love was stronger still as it faced an epic struggle. Love that fought for, and won, a happy ending for a superhero son, superhero dad – and a summer they’ll never forget.

Tampa Electric is so proud of Derek for his lifesaving action and quick thinking. We wish Levi a speedy recovery. Please remember when you see lightning or hear thunder, go inside immediately. Lightning can strike up to 15 miles away from the heart of the storm. Follow these tips to stay safe and aware.