A. We upgraded to smart meters as part of building a modern energy grid. The new equipment supports our ongoing efforts to provide an enhanced level of customer service along with safe, reliable and affordable electricity.

Tampa Electric uses a meter to measure the amount of energy consumed by your home or business. Meters display usage in kilowatt hours (kWh). Your monthly statement reflects the difference in kWh of energy used from the previous month to the current month. That number is used to calculate the cost of your electric service.

A. Your meter, also referred to as a smart meter or "Advanced Metering Infrastructure" meter sends data to Tampa Electric through a secure wireless network and eliminates the need for us to manually read your meter each month. Smart meters provide enhanced services such as the ability to start or transfer service remotely, respond to outages more quickly and provide you with daily usage information so you can be more efficient.

A. No, Tampa Electric is not monitoring your appliances. Smart meters do not provide Tampa Electric with information on how you use electricity inside your home or business.

A. Smart meters are proven technology and are safe and secure. All communications are delivered across secure networks.

A. Your smart meter collects and stores energy usage data. This data is sent to Tampa Electric through a secure radio frequency (RF) network.

A. The smart meter installed at your home or business emits a low level of RF and only transmit data for a few seconds per hour. The average RF levels are far below the safety standards specified by the Federal Communications Commission (FCC). The FCC is required by the National Environmental Policy Act of 1969, to evaluate the effect of emissions from FCC-regulated transmitters on the quality of the human environment. Tampa Electric only uses FCC-compliant meters. 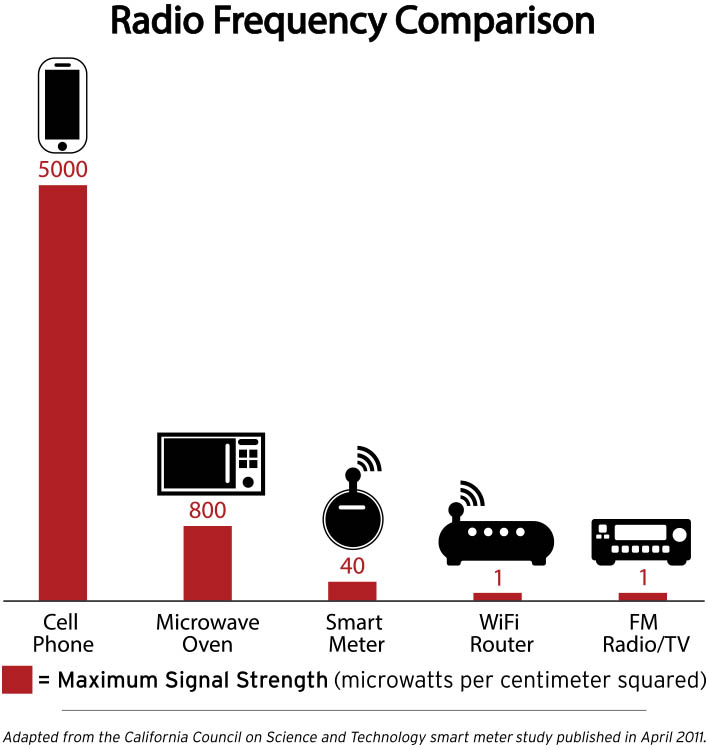 Here are some sources for more information.

Radio Frequencies and Smart Meters – SGCC is a consumer-focused non-profit organization aiming to promote the understanding and benefits of modernized electrical systems among all stakeholders in the United States.

FCC Policy on Human Exposure to Radiofrequency Electromagnetic Fields – The FCC is required by the National Environmental Policy Act of 1969 to evaluate the effect of emissions from FCC-regulated transmitters on the quality of the human environment. Worrying about wireless, The Economist, Sept. 3, 2011 – In an independent study released by the California Council on Science and Technology, an advisory arm of the state legislature, concluded that wireless smart meters produce much lower levels of radio-frequency exposure than many existing household devices – especially microwave ovens.

"Radio Frequency and Smart Meters," Smart Grid, October 2014 – The World Health Organization (WHO) has concluded that no adverse health effects have been demonstrated to result from exposure to low-level radio frequency energy such as that produced by smart meters.

Federal Communications Commission letter to Sage Associates Environmental Consultants, Aug. 6, 2010. – The chief of the FCC's Office of Engineering and Technology addresses misinformation regarding the health effects of smart meters.

A. Since 1996, the FCC has required all wireless communications devices sold in the United States to meet minimum guidelines for safe human exposure to RF energy. The guidelines are established to protect public health with a large safety margin. In addition, federal health and safety agencies including the Environmental Protection Agency, Federal Drug Administration, National Institute for Occupational Safety and Health and the Occupational Safety and Health Administration consistently monitor and regulate RF safety.

A. Yes. Itron has rigorous quality assurance processes to ensure the safety, accuracy and reliability of its smart meters. Itron complies with safety standards established by a number of utility industry standard bodies including the American National Standards Institute (ANSI), Institute of Electrical and Electronics Engineers (IEEE) and the International Electrotechnical Commission and National Electrical Manufacturers Associations.

A. The smart meters we're installing are designed with multiple layers of security, including a dual security authentication system the encrypts usage data transmitted by the meter. No personal or sensitive data is stored in the smart meter. All personal data is stored behind Tampa Electric's series of firewalls that are governed and audited according to the Sarbanes-Oxley Act (SOX) compliance regulations. Smart meters are proven technology and are safe and secure. All communications are encrypted and delivered across secure networks.

A. For customers who choose to opt out of a smart meter that can communicate remotely, we will install a standard digital meter that does not communicate remotely. This means that we are required to be on your property to manually read your meter each month. Because of the manual intervention, additional fees approved by the Florida Public Service Commission will apply. This includes a one-time meter installation fee of $96.27 and a monthly maintenance fee of $20.64.

A. Yes. If you choose to opt out of receiving a digital smart meter at your new home or business, you will incur a one-time fee for the installation of a non-transmitting digital meter. In addition, you will incur a monthly maintenance fee of $20.64 for Tampa Electric to manually read your meter.

A. Most customers have the option to opt out of receiving a smart meter. If you choose to opt out, we will replace your meter with a standard digital meter that does not communicate remotely. Fees approved by the Florida Public Service Commission will apply. The exceptions are Energy Planner and solar net metering customers. Energy Planner requires a smart meter to provide tiered (time-of-day) rates. Solar net metering customers require a smart meter to track the amount of solar delivered to the grid.

A. No, Tampa Electric does not offer an electro-mechanical meter but can install a digital non-communicating meter.

A. Because of the enhanced security built into our new systems and the need to verify readings, we cannot accept customer-provided readings.